This blog serves as a place for Chris to display sketches and write about his finished works. A native northwesterner, Chris Sumption was born in Portland, Oregon. He eventually moved with his family to Washington State where he divided his time between watching airplanes land, playing with Legos, and blowing his action figures up. He obtained his first degree in Industrial Design read more... 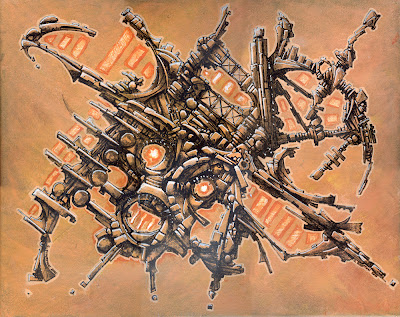 The Acrylic part is the foreground mechanical looking monster that I think sort of looks like the head of Medusa, circa the 1981 Clash of the Titans. Thus the name Medu5a. It sort of looked robotic, the 5 instead of the S made sense. I scanned in the canvas and then cut the Medu5a head out and color corrected. A background was created using a Hubble photo reference of the M16, Eagle Nebula. I tied it all together by giving the Medu5a head red glowing eyes. This worked on a couple of levels. First it payed homage to the 1981 movie reference. I think in that movie, Medusa's eyes glowed when she would turn intruders to stone. Second it links the foreground to the background. The glowing red eyes are very similar to the glowing pink stars. A happy accident or side affect from this choice is the depth of field feels flat. The three balls of light in a row, one of them a star, the other two eyes, look like they all exist in the foreground. The flatness is sold even further by the Medu5a head. It looks two dimensional. This is actually a style choice for this image. It's my interpretation of a Charles Wysocki painting.
Posted by Unknown at 2:42 PM